Amazing! The Lucid Nap > Art > The Evolution of Josie
Click Here
Top Picks: Checkout our reviews on WordPress and rate us!

As we established in my previous post, I’ve kind of been telling my story backwards. I started with a novel, tried to repurpose it into a comic, then an audiodrama, then a podcast and finally just recognized the plot- the most important thing in a story- was getting lost along the way.

I’m actually quite happy to have failed so spectacularly though. If I had enjoyed even a modicum of success on any of my little offshoot projects, I’d still be trudging away, wandering deeper and deeper into obscurity.

I think one of my first inklings I was on the wrong path was when I did my William S. Burroughs episode of my audiodrama Creeping Wave Radio. I didn’t write a script, as per usual, but a full narrative story about how I’d met Josie- my nefarious yet adorable ex.

While it was a stand alone piece, I realized that if you hadn’t picked up my comic “Lost Bread”- which I’d let stagnate for about 4 years- you wouldn’t know who the character was. Even if you’d read the comic, I’d barely touched on her actual significance in the plotline.

I intended to! I had outlines and notes with stories about her that had all been more or less abandoned to start up yet another new project. I owed it to Josie not to let myself get distracted again.

Meet Josie Doom, my ex, in her current incarnation. She’s honestly one of my favourite characters in the series. While she’d make a worthy arch nemesis, the plotline of “The Lucid Nap” series, much like real life, doesn’t have any hard line antagonists. It’s become kind of a staple of my stories, from “Lost Bread” to “Creeping Wave Radio”. There’s characters who cause trouble, beings whose objectives conflict with Napoleon’s, but no one is so one faceted as to be a villain.

Since the story is told through Napoleon’s dreams and journals, when we first encounter Josie, she’s a point of contention. She’s beautiful, but snide, and demeaning to Napoleon, who’s still very much in love with her. They were together for 10 years, and Napoleon has yet to reconcile who they themselves are outside of being her partner.

I started hinting at this in “Lost Bread”, having her show up in dreams and antagonize Napoleon.

The reality is that she’s just moved on with her life, and as of 2016, when the story begins, Napoleon hasn’t.

As the plot unfolds, Napoleon begins to decipher their bizarre, lucid dreams from their journals. Josie reveals herself as one of the few people who can help them unravel the preternatural entanglements they find themselves ensnared in.

I realize that its very unlikely my art will actually appear in my book when published, but I don’t really care. I make these pictures more as a tool for my own self, to sustain my focus and prevent burn out.

Worst comes to worst, I can always just post them online or do a solo show to celebrate the release.

The digital painting of of Josie is part of a larger illustration I’m working on, which I’ll probably debut here. I’m revisiting and revising older work as well. It’s going to be a long process, so I may as well have fun with it. I’m trying to anyway.

I’ve posted some of these pictures in previous blogs, but now you get to hear the story behind them.

Though I’d been warned, I wrote it all off as some kind of liquor induced episode. I’ve always had strange dreams, but they’d never really come to much of anything.

We used to travel a lot in those early days. I’m happiest when I’m on the road, where each new city and skyline retains that glorious patina of novelty. My job as an on site producer for home and garden shows meant I rarely slept in the same bed twice. So long as Josie was beside me, it really didn’t matter.

We were never really married, not legally anyways, but she started telling people we were. She even started calling herself Josie Doom.

I don’t know if she started to change, or if the shiny patina of our relationship just slowly eroded over time. I started having to stay on the road a lot longer, and in much less glamorous locales. Josie’s interest in the vagabond life dulled. I couldn’t blame her. Dinner Stuckey’s and nights at Motolodge were a far cry from what she’d become accustomed to. I told her things would pick up soon, that this was just a dry spell. Eventually she just opted to stay at home, in our apartment and wait for me to return.

I tried to focus on my work but I was injured by her choice. I started doing little things to punish myself, foregoing meals and working extra hours as a sort of self induced penance. At one point I was living entirely off of pudding cups, the strawberry cheesecake kind to be exact, that I stored in the glove compartment of my rental car.

I guess the pudding cup life caught up to me eventually. It happene one afternoon, in the Appalachian Mountains of North Carolina, during the Fall of 2007. I was surveying the location we’d be filming the next day. You had to hike a ways through the woods to get there, but I knew it wasn’t far.

I started feeling weak, and shaky, till all at once, I couldn’t support the weight of my body. My knees buckled under me and I fell down into the leaf litter, unable to move.

I lay there for a while in a daze, watching the sunset through the trees, enjoying this quiet reprieve from the duties of life. Then the realization hit me, that the forest was no place to be at night, especially not while incapacitated. In the distance, I heard gunshots and the sound of voices well lubricated with alcohol. I realized a group of locals had an evening of night hunting planned. I was more afraid of what they’d do to me than I was any of the nocturnal denizen of this woods.

I heard footsteps approach, three, maybe four people. One of them knelt and lifted my head on to their lap.

I couldn’t make out their face in the failing light of the evening, but as I turned my cheek, I felt the bristle of coarse fur. It was like that of a dog or a goat’s hide, not like a human’s legs at all. At first, I though this person might be wearing furry pants. That is until I caught the scent of an unmistakably female musk. I realized that whoever held me, they were a woman, luxuriously pelted but naked.

Three smaller figures turned cartwheels and danced in the distance around me. I supposed they must be her children. At some point, I must have drifted off to sleep. I’d have strange dreams, like memories, of a life I’d never lived.

When I told Josie, she said I’d probably heard it in an old war movie or something, and just integrated it into my dream.

“The human subconscious is a whole mess of half memories and unfulfilled sexual desires,” She’d informed me.

She then proceeded to show me just how many unfulfilled sexual desires I had stored in my unconscious mind at that moment, to the tune of Slayer’s “South of Heaven. I’m wasn’t particularly partial to Slayer, but I couldn’t find fault in the way she moved her body in time to the driving rhythms.

Things fell apart slowly. Her harsh words, disguised as a joke gave way public debasements. Admittedly, I enjoyed the thrill of humiliation at first, being made into a public spectacle, my shame on display for all to see. In the past, these affronts always lead to frantic, clumsy love making in whatever space would accommodate our bodies. Now, these humblings gave way to arguments, which seemingly bubbled up from nowhere, and Josie storming off in a rage.

To make matters worse, my dreams became more insistent. They’d call me into unconsciousness at a moments notice, even in the most intimate of situations and hold me under for hours. It was as if my brain was desperate to resurrect some long buried story, and demanded I sacrifice my waking life to serve as scribe. I diligently committed myself to writing and drawing everything I could recall from these episodes, if only to chase them away.

My own memories started to dither off. I’d forget names of people I’d known for years, and play it off as though I was just tired. Frequently, I’d forget where I was going while I was in commute, and have to call Josie and ask her. It was as if my brain could only store so much, and was making room to house new memories it had suddenly become apprised of.

I had an MRI, which much to my chagrin, turned out normal. I’d desperately hoped for some sort of explanation.

My therapist offered his theory.

“Napoleon, you took a high stress job, which kept you away from your loved ones.”

“Yes, the woman you’ve made the focus of your entire life.” He went on, “and yet you abandoned her.”

“That’s not how Josie sees it.” He coolly extolled, “In her eyes, you chose work over her.”

“Oh, I didn’t know you two were chatting it up on the regular.” I snorted back.

He ignored me and delved further, “It’s obvious that Josie is unleashing her pent up hostility on you for that abandonment. You come from the stress of work to the stress of home, leaving you with no sanctum.”

“You got that right.” I agreed.

“As a result,” He was brimming with eagerness to deliver his conclusion, “you’ve retreated into your mind. Your subconscious has invented lives for you to lose yourself in as an escape.”

“No, it’s a short story…and a movie, two movies, they did a remake in 2013… you know what, don’t worry about it.” I’d sloughed off sheepishly.

He suggested I take time off from work, and reconnect with Josie. It was during my time off that I discovered that she too had been in search of an escape. Instead of retreating into fictitious lives she’d been inviting very real people into our bed. That destroyed me.

I figured the dreams would subside now that my job and my relationship had come their conclusion. If anything, the dreams became more ruthless with my time, and more intense.

I’m desperate to find someone who can help me make sense of the endless notebooks I’ve accumulated, with memories pilfered from other times, other minds, other versions of myself. I just want to find a way to make these dreams end, so I can get my life back.

2022-03-02
Previous Post: Full Reverse: A Tedious Journey Back To The Drawing Board 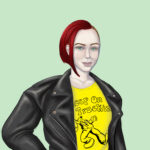 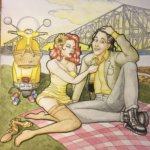