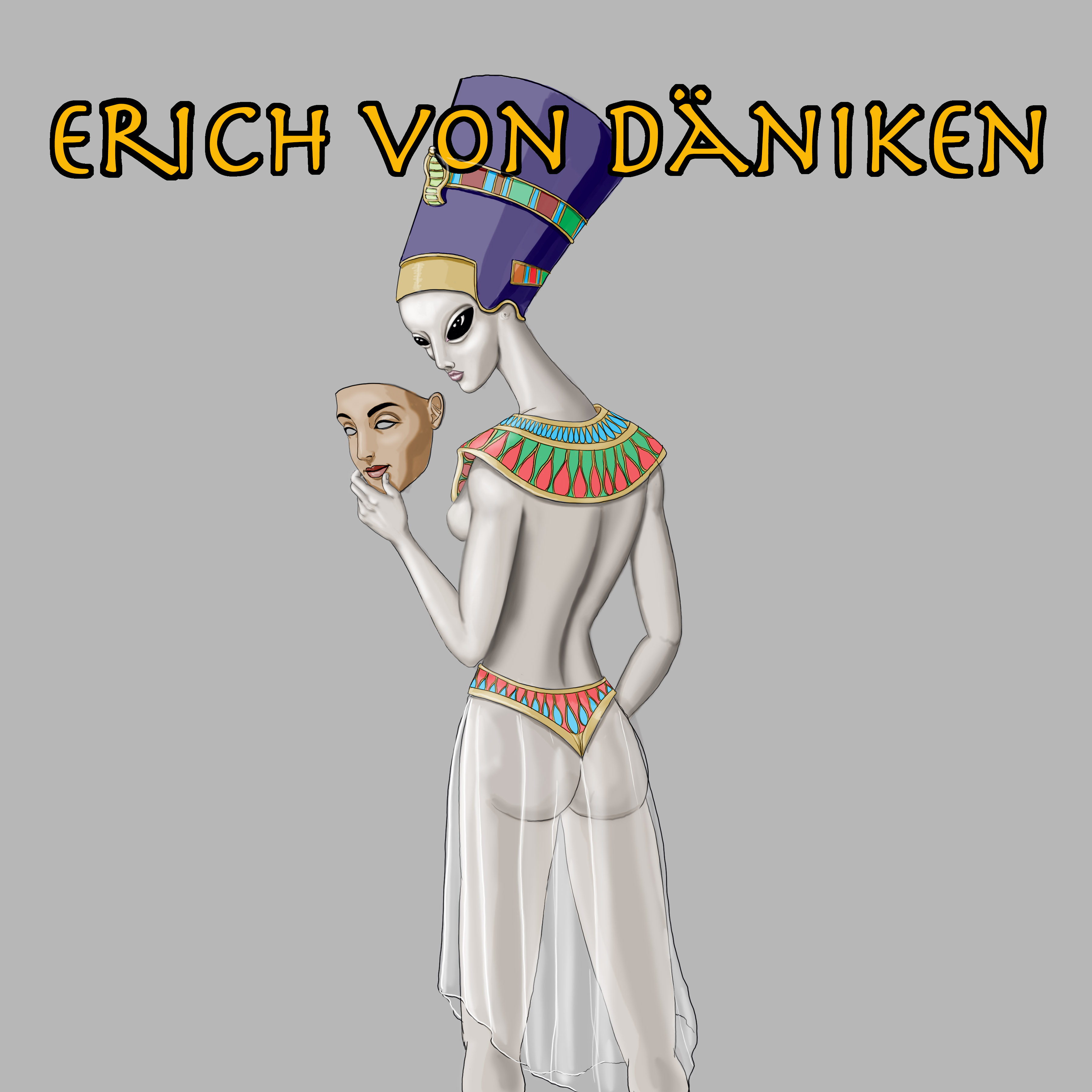 So, just in case you didn’t know, I’m the kid who does the featured episode art for each new and exciting episode of Grimerica. Seriously, it’s true! Starting up a new episode piece is generally the highlight of my week (unless something really extraordinary happens, and let me tell you, it would have to be pretty extraordinary to eclipse it!) I know its hard to tell from the written word, but if you think I’m being in any way sarcastic, I should tell you right here that I don’t get paid anything to do these. I create art for The Grimerica Show because I genuinely love the podcast, and simultaneously I love to draw. It’s that simple!

Episode art takes some time and research into each guest, seeing as you’re basically trying to sum up what they’re all about in a single image. Yes, it is a heady responsibility, and in this blog, I’m going to try and show you my process. I had wanted to actually film my work using a screen capture software like Camtasia. See I have a YouTube channel, but no videos. This makes me a bit sad, as I used to work in video and film production professionally, until I had my breakdown, (I’ll tell you about it sometime). Unfortunately, my YouTube debut will have to wait till I’ve accrued a bit more “disposable income” (if there is such a thing.) I know there’s some free alternatives to Camtasia, but most are either for PC only (I use a mac, how pretentious) or only let you record for 15 minute stretches, and well, that just doesn’t match my vision!

The magic begins, as it so often does in life, with a text. Harassing Graham and Darren on a regular basis allows me to discover who the next guest will be. I try to make my texts friendly, and non-threatening, yet raw with an innocent vulnerability and pleading desperation so as to increase the likelihood of a response.The process is not dissimilar to that of making a booty call. (I chose this text conversation to show because there’s no proprietary information!)

Once I have that information, Graham usually sends me some notes from the interview to help direct my work. At this point, I start to formulate an idea of what I’m going to do and skulk around the internet and my personal library shelves for reference imagery.

This weeks release will be Erich von Däniken, authour of such books as “Chariots of the Gods”, “History is Wrong”, “The Gods From Space”. Däniken’s work tends to focus heavily on alternative history hypotheses and ancient aliens theories. Being a comic artists myself, and a huge fan of Enkai Bilal, Däniken’s ideas start to dredge up imagery from Bilal’s “The Nikopol Trilogy” , a graphic novel series which touches on similar subject matter. If you haven’t read it, you should, it’s glorious. If you’re one of those folk who just can’t be troubled to read, (shame on you) they made a movie based on the first book in the series back in in 2004 called Immortal (ad vitam) So check that action out!

After a casual perusal of my comic collection and an impassioned Googling, I have a pretty good idea of how I’m going to approach this episode. I generally start out by creating a loose sketch of my idea, my layout.

I do this on a 35% grey background in blue at 35% opacity. The grey background will help show highlight and shadow once we get going. My choice to start out in blue harkens back to when I used to have to draw on paper (I use a Cintiq tablet currently.) Back in the olden days, I’d start my drawings off with a pencil in the colour of “non-photo blue.” It was useful in that when photographed your layout after inking, the blue sketch underneath vanished (for the camera anyway.) It just feels weird now to do my layout in anything but blue.

So, as you can see, we wind up with a sexy alien girl masquerading as Nefertiti. Alien ladies are a particular obsession of mine, and robot-girls, and girls with ray guns…and pretty much anything retro-futuristic and blatantly sexual. Call it a fetish, it tends to be where my art wanders to.

Now that the layout is complete, I solidify my design by tracing over my sketch in black on a new layer. I normally use a hard round pen tool in Photoshop, set on black at 100% opacity. In the brush presets, I set shape dynamics so they are controlled by pen pressure, with a minimum diameter of 0%. This gives a nice, tapered line, more like what you’d get from a pen or brush when you ink (take a look below and you’ll get what I mean).

And now a close up on that crazy line work.

Next I generally add in the basic shading on a new layer.

And then the highlights on yet another layer, which I drag to the very top and keep it there through-out the rest of the process.

With that business taken care of, I usually lay down my initial colour layer, set below the shade and highlight layers, just to block it out. I set my colour layer to overlay, because I’m going to paint over it. For my comic work, I do the colour at full opacity.

After I have my colours set, they serve as a nice template for my painting layer. For this drawing, I really only devoted myself to painting the alien girl’s grey skin, as I want all of her accoutrements to remain flat, and false looking (they’re part of a disguise after all.) I just go through intensifying shadows and details to give a more three dimensional look.

I don’t want any background for this piece because I want it to feel a bit sterile. My idea is sort of that the human world is dull and mundane but alien influence adds in some colour, much needed pizazz, and sexual intrigue (note dat ass!) I also like the play of the greytones in her skin with the broad grey background. That, and I’ll be adding in text, so too much business gong on in the back can drown out the actual name of the guest, rather defeating the purpose.

I used a font called Herculaneum in black, rasterized the layer and added a heavy stroke around the outside. I need to make sure the guests name is going to pop-they’re the whole point of all this after all!

I then put a new layer with the same font on top of this, in a gold tone. This colour is actually the same one as the gold details in the alien lady’s outfit, except punched up to full opacity. The background being as light as it is, I wanted to overlay the text instead of using a drop shadow effect underneath. This way, I can create a crisper line that stands out. When I was in school they used to scoff and say:

“Oh GAWD, don’t ever use drop shadow, it cheapens the beauty of the typography.”

I say that’s a bit silly, I use drop shadow when it works, just in this case…nah.

Aaaand this is pretty much the final draft, unless revisions are requested (sometimes that happens.) Hope you’ll tune in for Erich von Däniken and the many other strange and delightful guests headed your way on the next The Grimerica Show podcast! 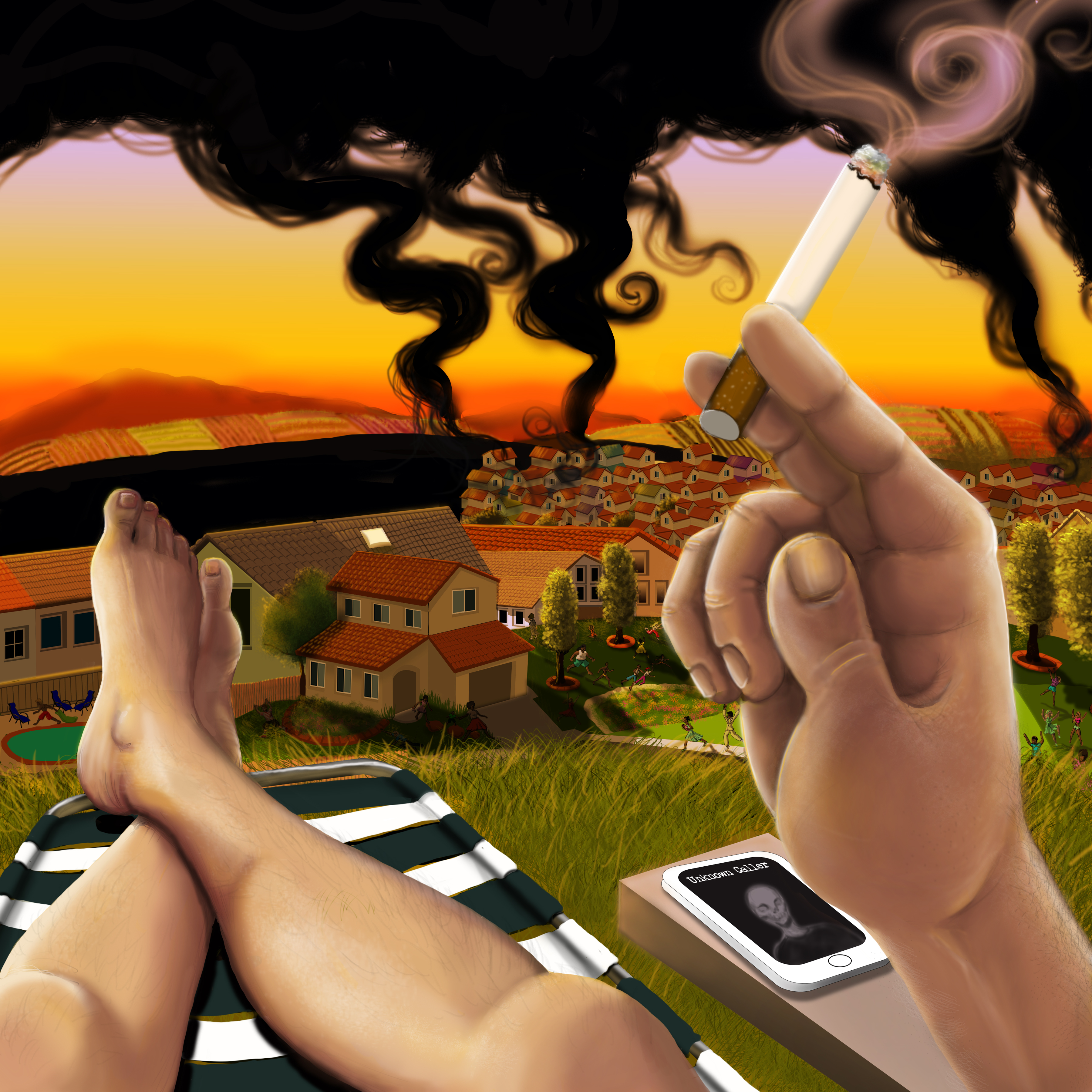 Some exciting news! Matt Schmitz (A.K.A Matt in The Hat) and I will be collaborating on a collection of short stories. He will be authoring them and I will be providing the illustrations.

The first in our treasury “A Far and Reaching Darkness” was originally posted on The Grimerica Show website, and now can be found at Barnes and Noble, iTunes and Smashwords respectively!

Schmitz’s literary voice brims with the kind of tongue in cheek nihilistic abandon that would make Camus or Sartre chuckle wryly. He shrugs his shoulders, bemused by the mechanical antics of modern life and grins unflinchingly at the inevitable approach of oblivion. My words alone cannot do his piece justice, only a reading for yourself can accomplish that:

Please help support independent artists like ourselves by purchasing this story from: 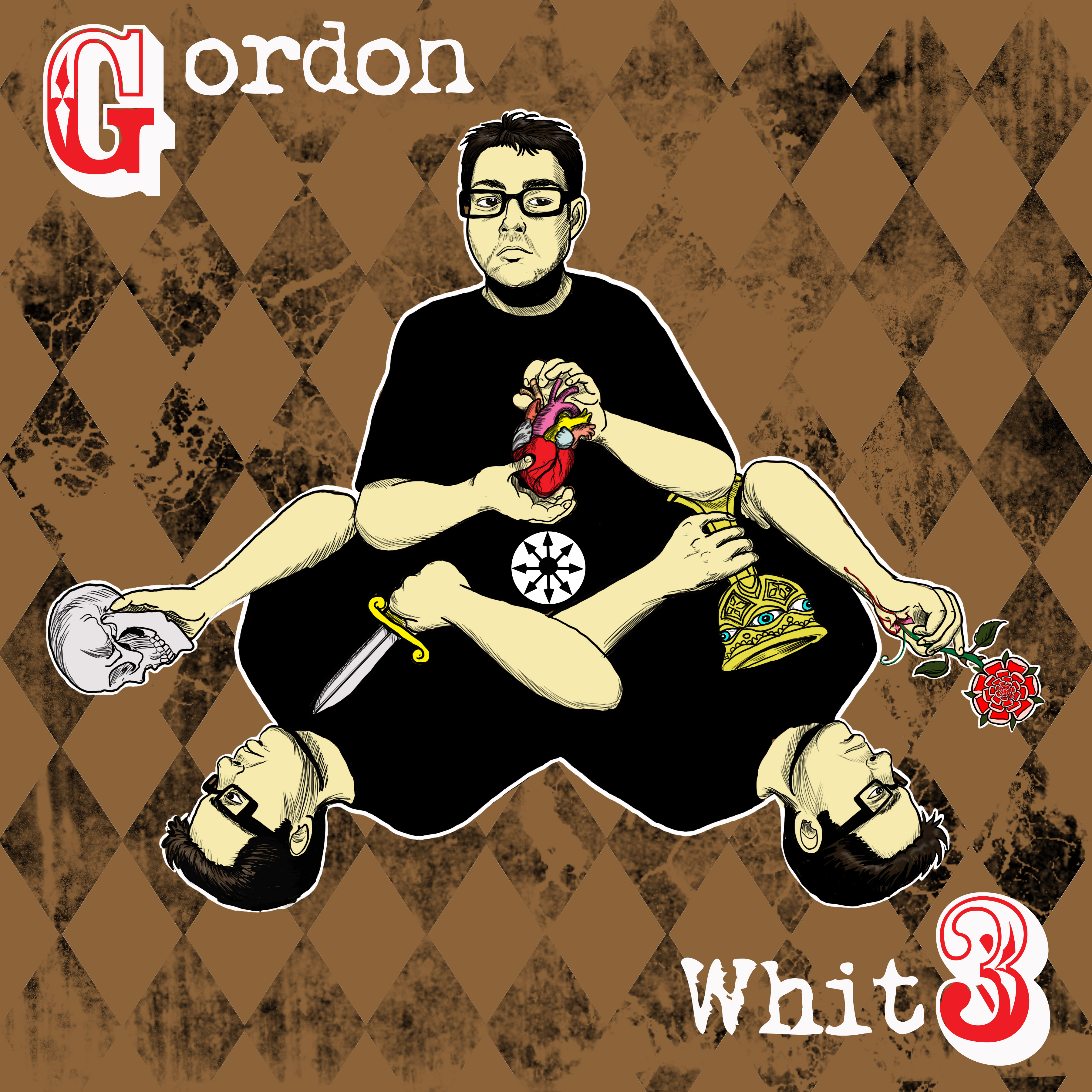 The chaos magic of Gordon White ( of http://runesoup.com/ ) is unleashed in a mesmerising interview from The Grimerica Show. I provided original episode art. It was a real challenge to try and capture White a single still image. He’s such a multifaceted personality. From his latest book “star.ships – the prehistory of spirits” to his views on the relevance of mythology and esoteric traditions in the modern world, White is a mind alive and brimming with ideas worth pondering!

Tom Powell, authour of “The Edges of Science” gives a poignant interview regarding Sasquatch, and how the current paradigm of crytozoology may be fatally flawed. His dedication to the understanding of the entity known as sasquatch is sure to intrigue even the most hard nosed skeptic.

My own artwork, a sasquatch pinup girl, inspired by an unusual sasquatch report highlighted in this podcast is now available as a lithograph print in my store as well! http://www.lostbreadcomic.com/shop/

#155 – Grimerica Talks Squatchin’ & “The Edges of Science” with Thom Powell

Mike Clelland of http://hiddenexperience.blogspot.com/ and authour of the new book “Messengers” talks to Grimerica about owl experiences, and how they may relate to synchronicities, abductions and a general stirring in human conciousness.

I provided the episode art, ad I have to admit this was a really fun one. I have had reoccurring dreams about owls all my life and I had the chance to incorporate some of that imagery into my artwork.

This interview is a wild ride, sure to take your mind to new heights!